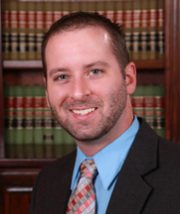 ﻿Matthew is originally from Ponchatoula, Louisiana. He attended Southeastern Louisiana University and acquired a degree in Political Science while being active in Delta Tau Delta fraternity. After graduation, Matthew moved to Kentucky and attended law school at Northern Kentucky University. Upon completion of his law degree, he moved back to Louisiana. Matthew started working for Sherman Mack in February of 2010 and passed the bar exam in February as well.